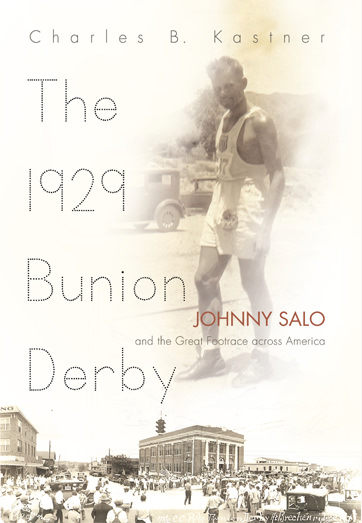 Johnny Salo and the Great Footrace across America

On March 31, 1929, seventy-seven men began an epic 3,554-mile footrace across America that pushed their bodies to the breaking point. The race was nicknamed the “Bunion Derby” by the press. The men averaged forty-six, gut-busting miles a day during seventy-eight days of non-stop racing that took them from New York City to Los Angeles.

This was the second and last of two trans-America footraces held in the late 1920’s. Forty-three of the racers were veterans from the first ever trans-America race held in 1928. These veterans had learned hard-won lessons of pace, diet, and training, and they put them to good use the next year. Among this group, two brilliant runners, Johnny Salo of Passaic, New Jersey and Pete Gavuzzi of England, emerged to battle for the $25,000 first prize along the mostly unpaved roads of 1929 America, with each man pushing the other to go faster as the lead switched back and forth between them.

To pay the prize money, race Director Charley Pyle cobbled together a traveling vaudeville company, complete with dancing debutantes, an all-girl band wearing pilots’ outfits, and blackface comedians, all housed under the massive show tent that Charley hoped would pack in audiences.

This is the story of, arguably, the greatest footrace in the world.

Praise for The 1929 Bunion Derby

“In March of 1929, seventy-seven runners, some nearly penniless, set out from New York City on a footrace to Los Angeles. . . . On June 16, seventy-eight days after leaving New York, nineteen finished. . . . Kastner tells an absorbing story of the ups and downs . . . the runners, the Follies, and the support crew. . . . An eye opening perspective on the history of distance running and of the courage and determination of this band of runners making their way across the United States.”

—Arete: The Journal of Sport Literature,

Kastner, from Seattle, writes a true story of how 77 men began an epic 3,554-mile footrace across America that pushed their bodies to the breaking point. He is planning a book launch at 7 p.m. May 5 at the University Book Store in Seattle.”