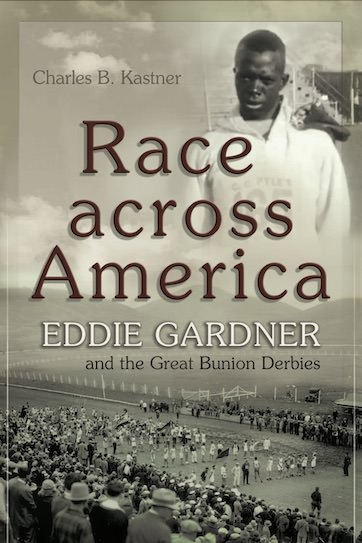 On April 23, 1929, the second annual Transcontinental Foot Race across America, known as the Bunion Derby, was in its twenty-fifth day. Eddie “the Sheik” Gardner, an African American runner from Seattle, was leading the race across the Free Bridge over the Mississippi River. Along with the signature outfit that earned him his nickname—a white towel tied around his head, white shorts, and a white shirt—Gardner wore an American flag, a reminder to all who saw him run through the Jim Crow South that he was an American and the leader of the greatest footrace in the world.

Kastner traces Gardner’s remarkable journey from his birth in 1897 in Birmingham, Alabama, to his success in Seattle, Washington, as one of the top long-distance runners in the region, and finally to his participation in two transcontinental footraces where he risked his life, facing a barrage of harassment for having the audacity to compete with white runners. Kastner shows how Gardner’s participation became a way to protest the endemic racism he faced, heralding the future of nonviolent efforts that would be instrumental to the civil rights movement. Shining a bright light on his extraordinary athletic accomplishments and his heroism on the dusty roads of America in the 1920s, Kastner gives Gardner and other black bunioneers the attention they so richly deserve. 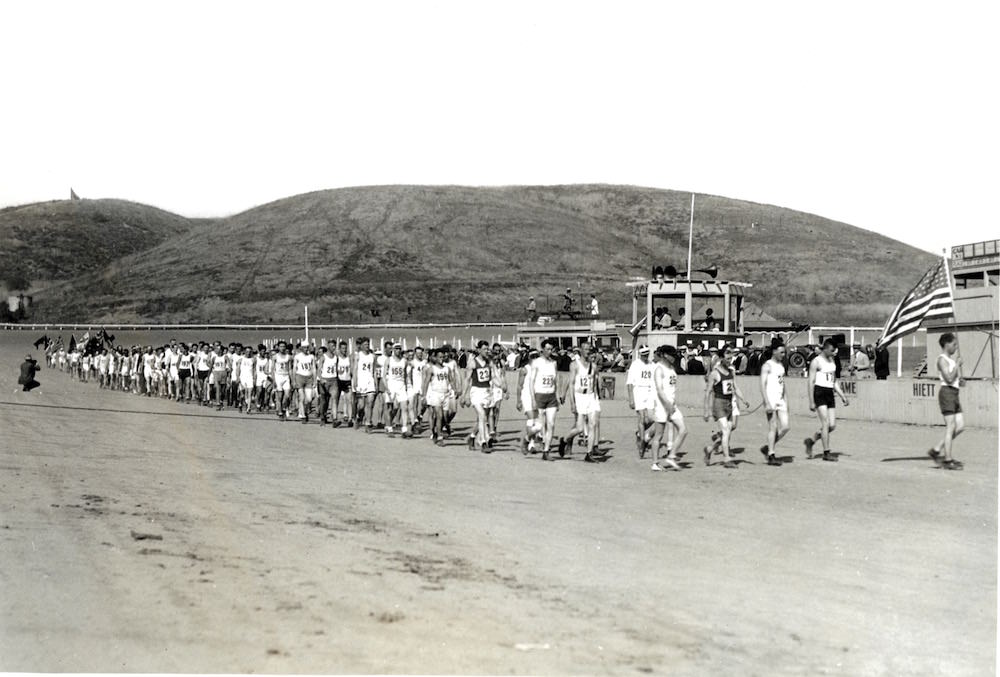 “When 199 men toed the line for the start of the first derby in Los Angeles, few observers thought any of the men would survive daily ultramarathon racing along a grueling thirty-four-hundred-mile course and that those who did risked early death by overstressing their hearts from the strain of such exertion.  The bunioneers would run the length of U.S. Highway Route 66, the “mother road,” from Los Angeles to Chicago and then on to the finish in New York City.  In 1928, Route 66 was mostly an unpaved dirt road that crossed the Mojave Desert and ascended and descended the Rocky Mountains in Arizona and New Mexico.  The route then took the men across the muddy Texas Panhandle, the rolling red-dirt hills of Oklahoma, and the ancient, eroded Ozark Mountains in Missouri before reaching the Mississippi River at Saint Louis.  From there the men would reach better hard-surfaced roads from Illinois to the race’s end at Madison Square Garden in New York City. There had never been anything like it before—they would be making the playbook for trans-America racing as they went.” 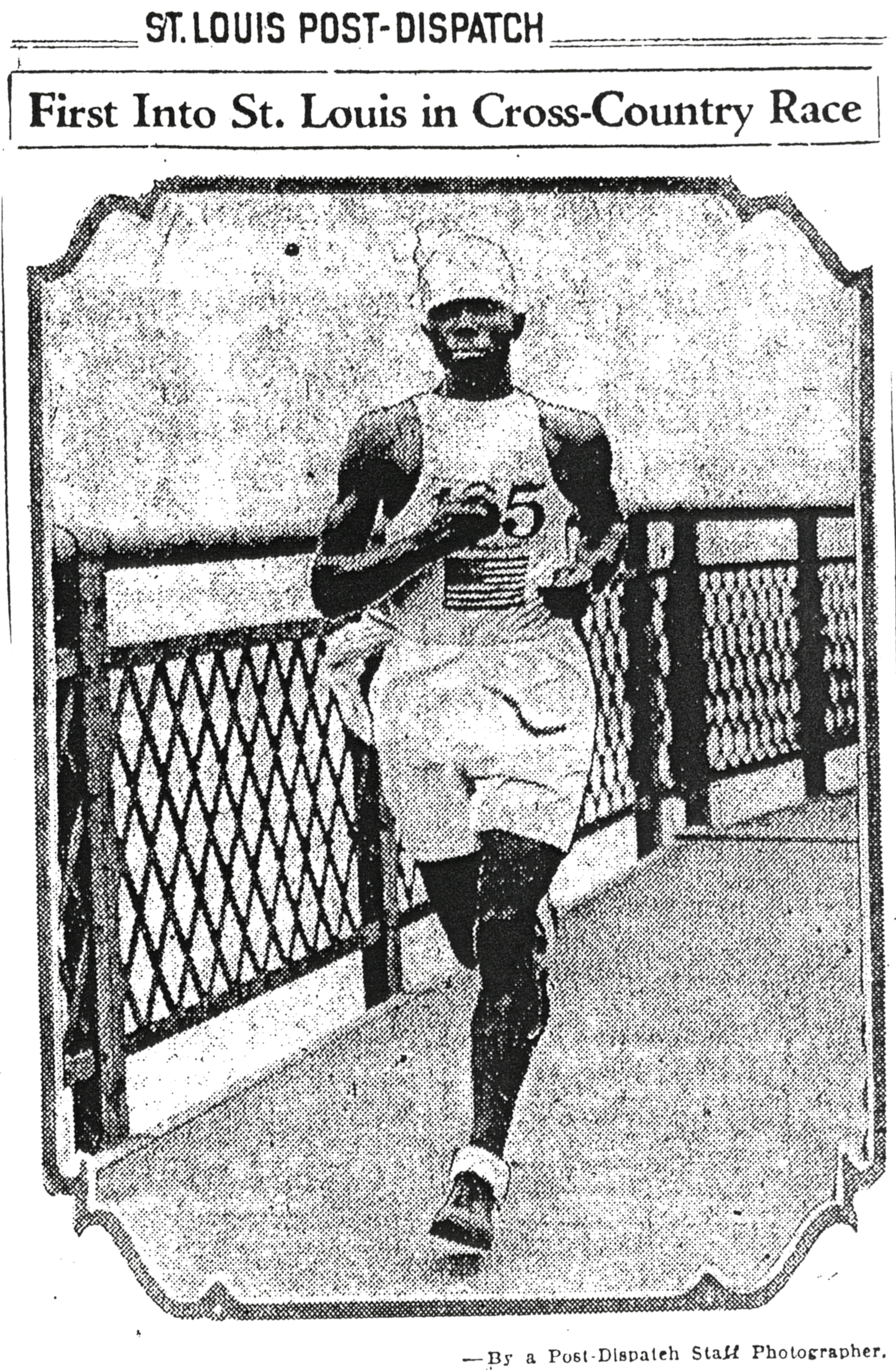 “On April 23, 1929, the bunion derby returned to the Jim Crow South.  On that day, Eddie “the Sheik” Gardner, an African American runner from Seattle, Washington, was leading the bunion derby across the Free Bridge over the Mississippi River that separated Illinois from Missouri.  He was flying, blazing over the short, by derby standards, twenty-two-mile course at a sub-three-hour marathon pace. Eddie was wearing the distinctive outfit that earned him his nickname, a white towel tied around his head and a white sleeveless shirt and white shorts, but he had added something new to his outfit. Below his racing number, “165,” he had sewn an American flag, a reminder to all who saw him run that he was an American and, that day, the leader of the greatest footrace in the world. He was setting himself up for another collision with southern segregation.” 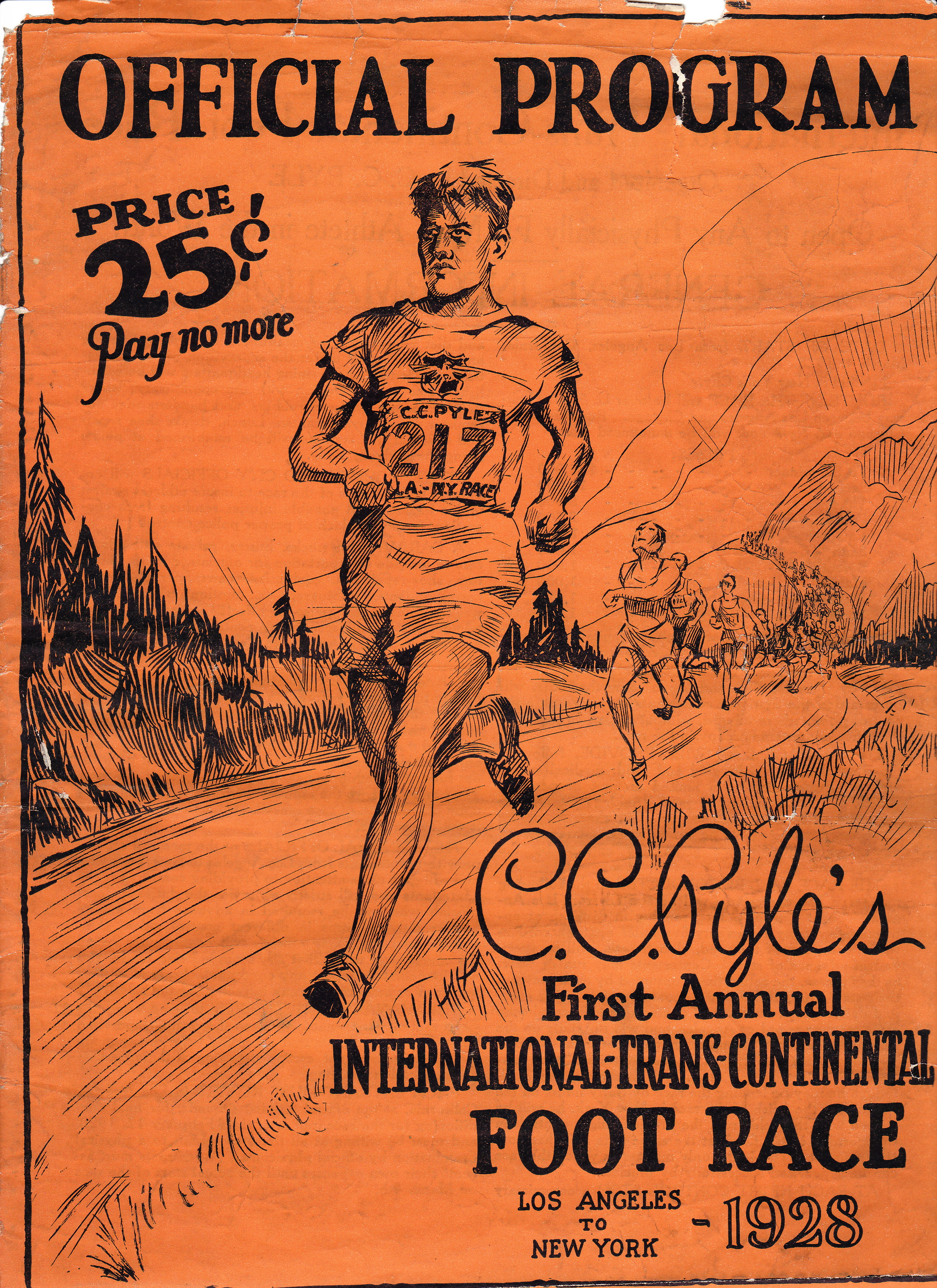 “On the derby’s last day on Route 66, black Chicagoans lined the road starting fourteen miles west of the city to cheer Eddie on as he raced by. Most of them had left the South either as children or as adults in search of a better life.  They knew what Eddie had endured from firsthand experience.  They had come to cheer on a man who had risked everything to compete at the highest level of the new sport of trans-America racing and in turn, through his courage, became a rallying point for their brothers and sisters still trapped in the South.”

“Eddie Gardner was living the words of W. E. B. Du Bois to demand his rights as an American citizen to compete whenever and wherever he pleased, and he risked his life to do so.  That act of risking life and limb at the hands of irate white spectators made him a foot soldier in the battle for racial equality in America. He was a harbinger of the thousands of Freedom Marchers who would take the same risk when they challenged injustice in the South in the 1950s and 1960s.”

Praise for Race Across America

"Life, it's said, is a marathon. But Charles Kastner shows us in vivid, historical detail that the life of runner Eddie Gardner was unique—a race that serves as an engrossing example of what it means to be resilient."

"This powerful book has the potential of placing long distance running in its rightful place center stage in the history and struggle of the African-American athlete. . . . A must read for readers interested in sport history."

—Donald Spivey, Distinguished Professor of History at the University of Miami

"Charles Kastner spotlights the heroics of a previously unappreciated athlete in Eddie Gardner, who participated in a bizarre sporting event many years ago that few people remember. I applaud his efforts to give the Bunion Derbies their due as a quintessential American footrace."

—David Davis, author of Waterman: The Life and Times of Duke Kahanamoku

"Kastner brilliantly delves into the phenomenon of transcontinental racing and the heroics of Eddie Gardner, an athlete on par with Jesse Owens and Joe Louis who combated Jim Crow laws while competing as a black person in a super-human challenge across America. I felt like I was right there beside him the whole way, a truly epic book!"

"Race Across America captures the magnitude of challenges faced by Eddie Gardner as he competed in the greatest race on earth: desert heat, hours of mental and physical strain, endless mountains, intense rain, and racial barriers; and the winning spirit it took for him to reach the finish line."

"Chuck Kastner masterfully brings to light the story of Eddie Gardner, the first great African American Ultramarathon runner of the 20th Century and in doing so, provides a powerful lesson in American and Civil Rights history."

"A fascinating look at the birth of transcontinental ultra-running, the courageous men who competed more than 90 years ago, and African American Eddie 'The Sheik' Gardner who ultimately endured the most."

"Read the book!  The will power of these runners will impress you."

THE PAUL COWAN NON-FICTION AWARD, first given 1990, was named to honor Paul Cowan, a Peace Corps Volunteer who served in Ecuador from 1966 to 1967. Cowan wrote about his time as a Volunteer in Latin America in the ’60s. A longtime activist and political writer for The Village Voice, Cowan died of leukemia in 1988.

Brian covered the 140 mile course in thirty plus hours of almost continuous running.  His brother Andrew paced him through fifty miles of the course.  It was a thrill of a life time to be part of this amazing race. 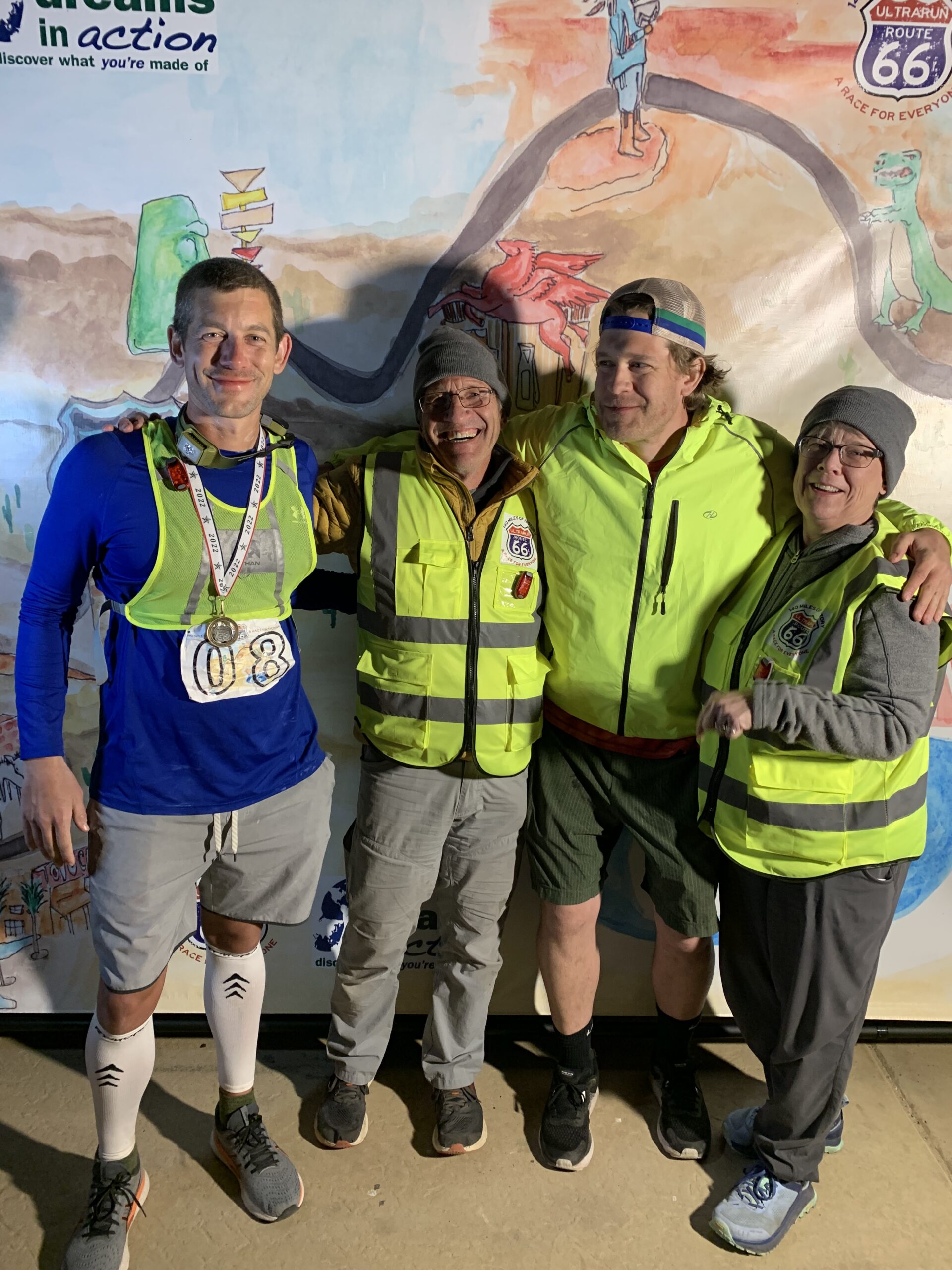 It was a real thrill to have the chance to talk about my bunion derby books at the pre-race meeting, and to be introduced by the legendary ultra runner and race co-founder Marshall Ulrich. The three day ultra starts tomorrow morning in Seligman and finishes at Topock on the Arizona side of the Colorado. I’ll post updates throughout the race. 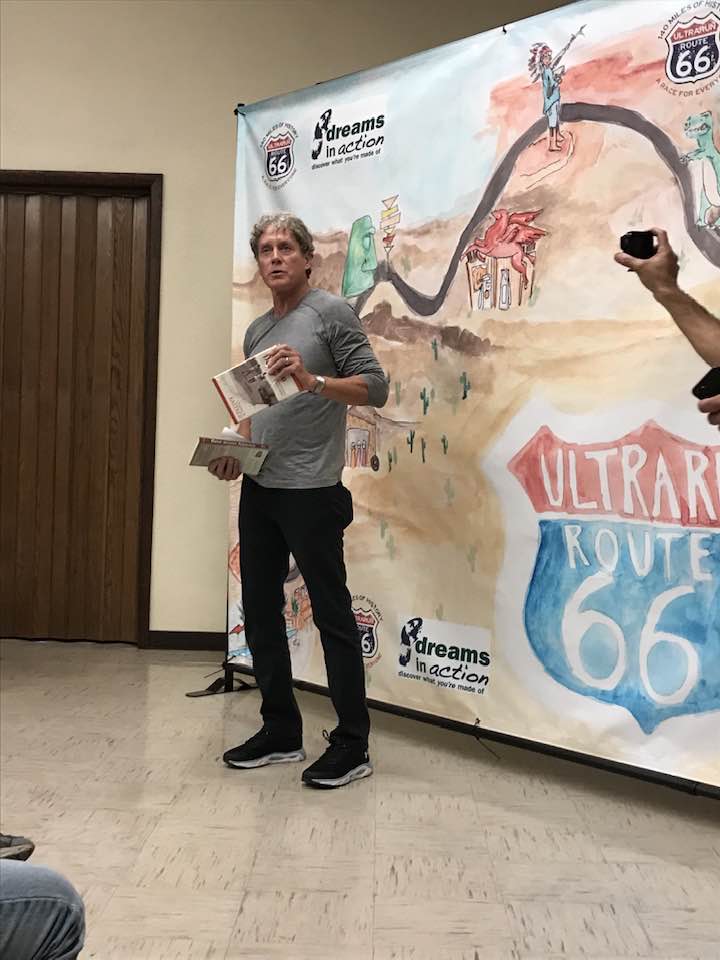 Big news!! Legendary ultramarathoner Marshall Ulrich and his wife Heather just announced a three day ultramarathon on historic Route 66 in Arizona this November. The field is limited to 100 entries and it will fill up fast

My son Brian will run the race, and his brother Andrew and I will serve as his support. The runners will be following in the footsteps of the bunioneers who crossed Route 66 on the first ever trans-America marathon in 1928. I'll be there to give some history on the 1928 race and sign copies of my bunion derby books. I hope to see you on Route 66 this November!

Interview on the Gotta Run with Will show on February 13, 2020 in Manhattan

Behind the Scenes
Gotta Run with Will Show in NYC 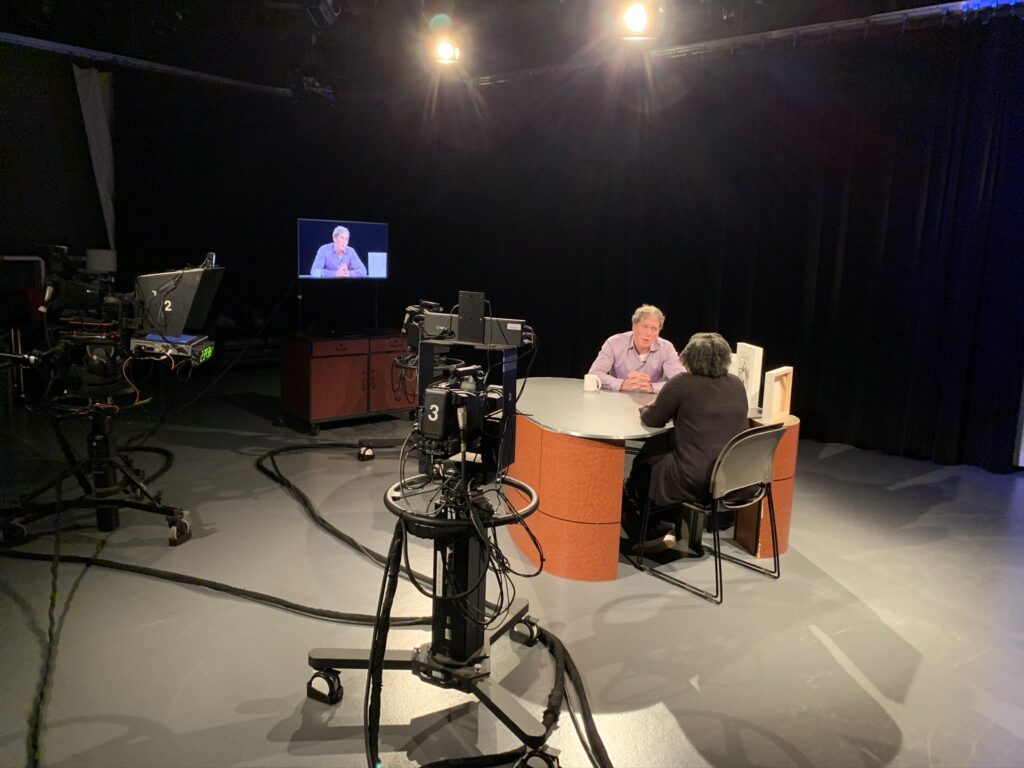 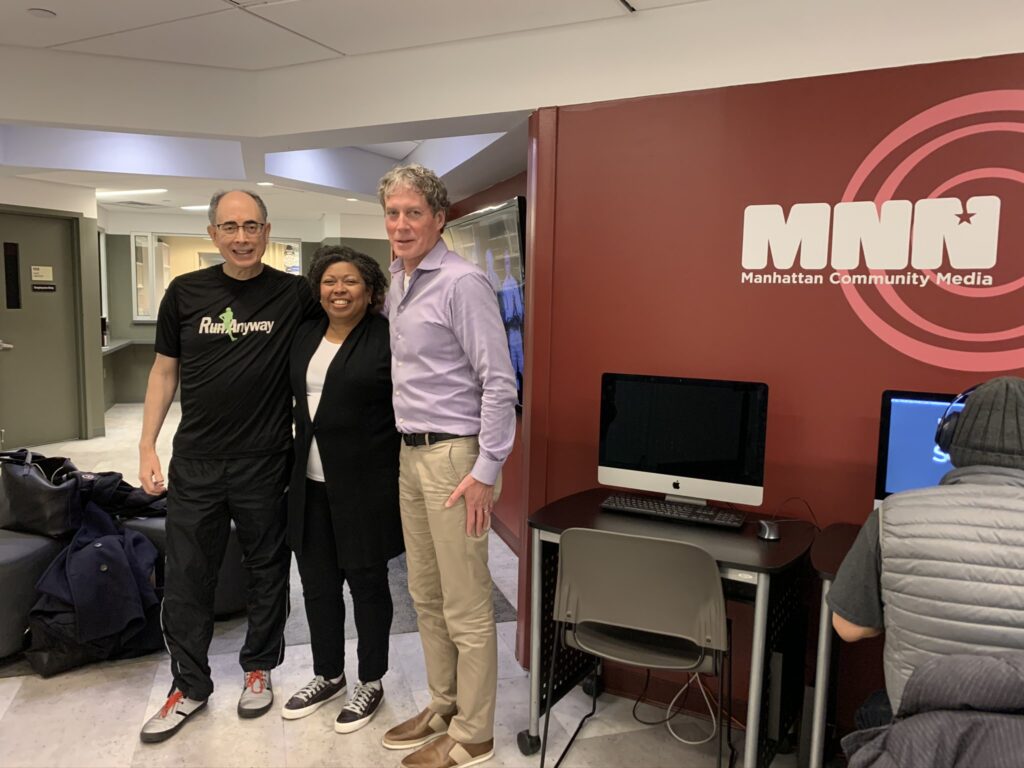 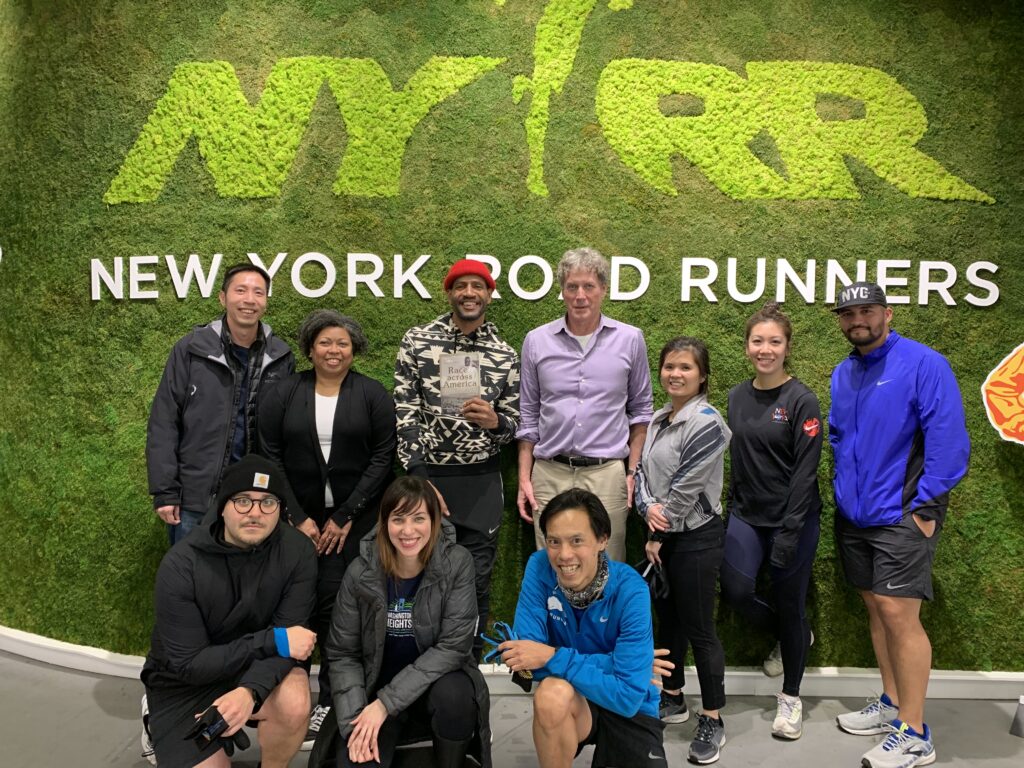 From book talk at the New York Road Runners Club on February 13, 2020. Journalist/runner, Melanie Eversley, moderated book talk at the NYRR; and filmmaker/runner Kelvin Coffey joined at NYRR to talk about black history and Eddie “the Sheik” Gardner. 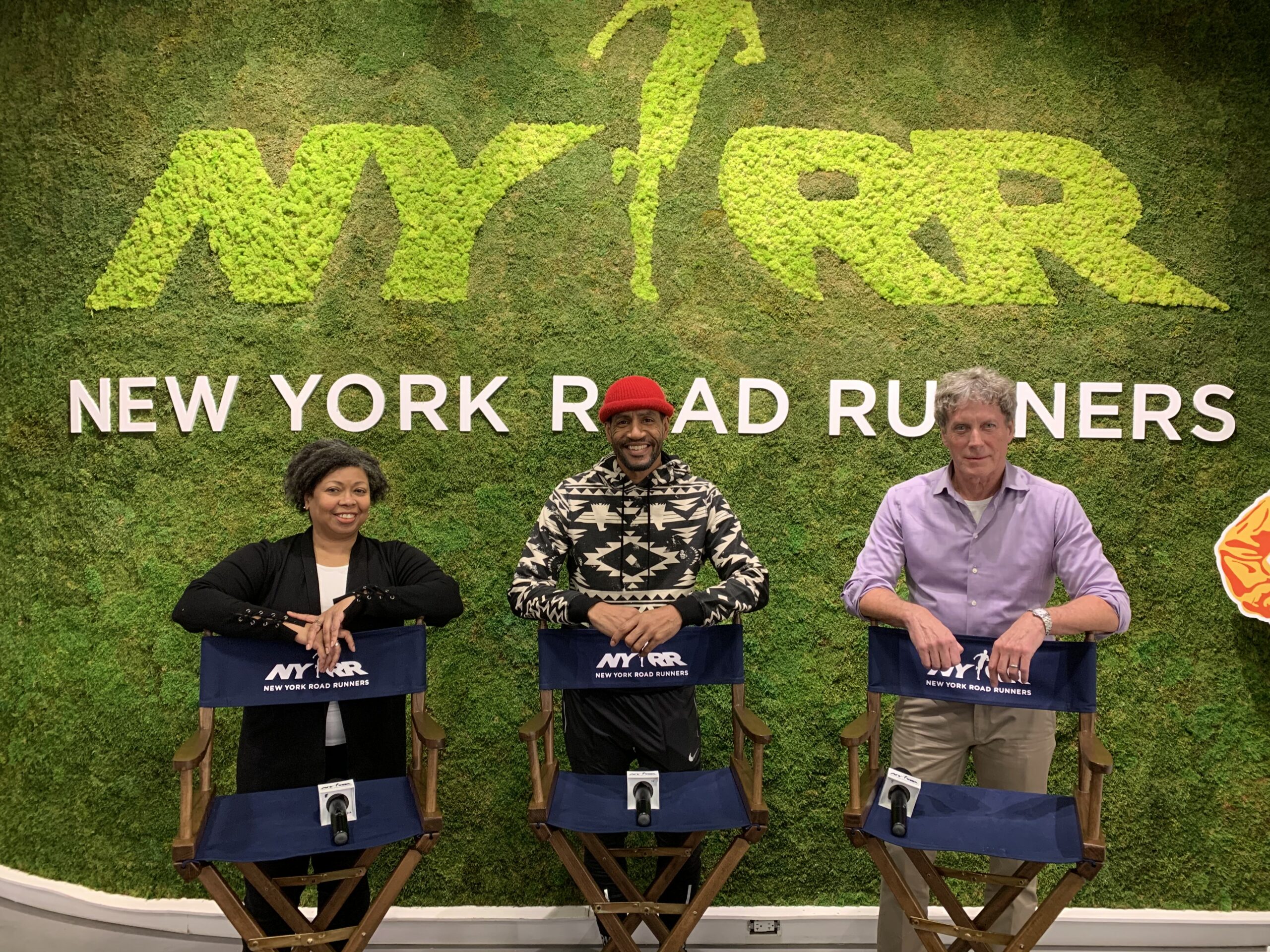 Check out my radio interview on AM620, WZON, a station owed by the horror writer Stephen King. The station is located in King’s hometown, Bangor, Maine.

It’s from a segment of the “Downtown with Rich Kimball” show, called Sports Lit 101, which is broadcast live each Wednesday at 3:30 PM.  This broadcast was the third and last segment devoted to my book, Race Across America.

Charles has wrapped up his book events for Race Across America.

Subscribe to the newsletter to be notified of upcoming events.

Sign up for Charles' Newsletter and stay informed about upcoming speaking engagements and other events.